The Cretaceous period lasted from about 145 million to 66 million years. That is almost 80 million years, considerably longer than the Triassic and Jurassic periods. It may sound like a silly name, but it actually makes sense. In Europe, the remains of many dinosaurs from this era are found in layers of limestone. Limestone is usually a bright white colour, which makes it look like chalk on a blackboard. Think, for example, of the chalk cliffs of the English coast! 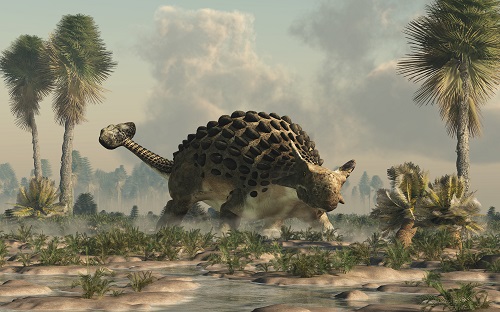 The end of the dinosaurs

The Cretaceous period ended about 66 million years ago with another wave of mass extinction, but this one was perhaps the biggest of all. This mass extinction was probably caused by a meteorite impact. In Mexico, a crater from this time was found, and it showed that the meteorite that hit the earth had a diameter of 30 kilometres! Due to the enormous impact and the fires that started in the area, many animals must have died, but the effects were worldwide. The meteorite impact created so much dust in the air, that the sun could hardly break through to the ground all over the world. Without sunlight, no plants would grow, so the large herbivores soon starved to death. As a result, the large predatory dinosaurs hardly had any food left either, so they also became extinct. The only dinosaurs that survived were a few small species of flying dinosaurs. Scientists think that these dinosaurs are the ancestors of all the birds we have on Earth today. Have you ever noticed that some dinosaurs look very much like birds?

It is a pity that dinosaurs became extinct, because they must have been such beautiful, impressive animals. But maybe we should be glad about it. With the disappearance of the dinosaurs, small, vulnerable mammals could become the dominant group of animals in the post-Cretaceous era. After the dust clouds had settled, and with no large predators left, there was enough food again. These small mammals could easily develop and ultimately, humans also evolved from this!