The supercontinent Pangaea broke into several pieces at the beginning of the Jurassic period. Since these pieces drifted further apart in the million years that followed, many new animal and plant species could emerge. Two factors were a large help for these emerging species: there was not as much desert, because almost all smaller pieces of land were almost always covered in water. Many places therefore had a more humid and cooler climate, which made more life possible. On top of that, the separation of the continents also meant that groups of dinosaurs and other animals were separated from each other, which allowed them to develop in other directions, and eventually to form other species. 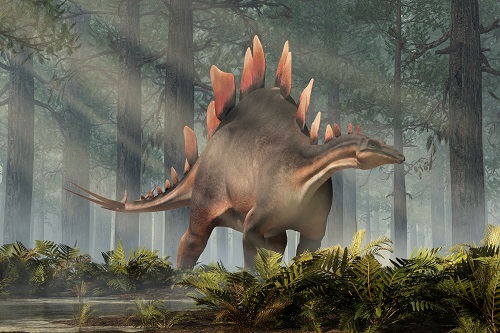 Bloom time for the dinosaurs

The Jurassic period was a very good time for the dinosaurs. Their biggest competitors, such as the archosaurs, a large group of crocodile-like predators, had become extinct by the end of the Triassic Era, allowing the Jurassic dinosaurs to become the dominant group of animals all over the world. From the beginning of the Jurassic, there was plenty of food available for the herbivores, which allowed them to grow bigger and bigger. This eventually led to the emergence of species such as Brachiosaurus, which grew to a height of 15 metres. Due to the growth of the herbivores, there was also more than enough food for carnivorous dinosaurs, which grew larger as a result. It was important for predatory dinosaurs to be large and strong, because in this way they could also kill large herbivores. A single killed Brachiosaurus could feed large carnivores for weeks!

It was not only on land that dinosaurs could grow very large during the Jurassic period. Also in the sea, many large species had died out by the end of the Triassic period, so that many new species developed in the Jurassic. A good example are the Plesiosaurs. These were marine reptiles that could grow up to 15 metres long. They had large flippers and long necks. The Loch Ness monster in Scotland is often depicted as something resembling a plesiosaur!

The Jurassic era is perhaps most famous for the Jurassic Park films, which are named after it. Most of the dinosaurs featured in these films lived in Jurassic. Since the first Jurassic Park movie came out in 1993, dinosaurs have become a lot more popular and people know more about them.

The Jurassic ended around 201 million years ago, after which the Cretaceous period began. A mass extinction also occurred at the end of the Jurassic, although it was not nearly as great as the mass extinction that began the Jurassic. This was largely due to a change in climate, which suddenly became a lot warmer or colder. In any case, it would not mean the end of the dinosaurs, because they remained the dominant species in the Cretaceous period as well.