The Triassic is an era that took place approximately 252 to 201 million years ago. It is almost impossible to imagine how long ago that was. If you write the number down, there are six zeros (252,000,000 million years ago)! Humankind has only been walking the Earth for about 125,000 years. This means that if you compare the time from the beginning of the Triassic to the present one 24-hour day, the first humans would not appear until 43 seconds before midnight!

At the beginning of the Triassic period, the Earth looked very different. All the continents were together at that time! Together they formed a supercontinent, called Pangea, surrounded by the Panthalassa ocean. The continents slowly moved away from each other, so that eventually the map as we know it today was created. Have you ever noticed that the west side of Africa would fit around the east side of South America quite well? 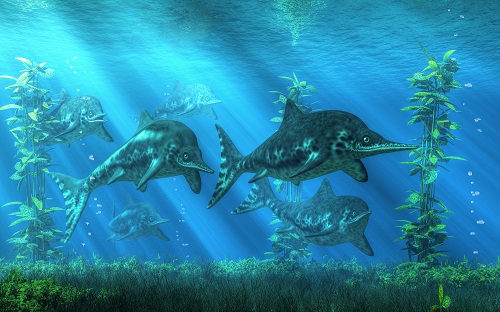 At the beginning of the Triassic period, there were not many animals. This was because the previous era, the Permian, had ended with a mass extinction. This was probably due to a gigantic volcanic eruption or a meteorite impact, which caused 75% of the animal species on Earth to become extinct. This left plenty of room for new development and evolution, so that about 235 million years ago the first dinosaurs evolved from smaller, land-living reptiles. It is not known exactly which species were the first.

During the Triassic period, most dinosaurs lived close to the coast. They had more food and shelter than in the desert-like interior of the supercontinent. The early dinosaurs had to be careful, as they were still quite small and rare during this period. Although they would later become the largest herbivores and the most dangerous predators, they still had to watch other species dominate until the end of the Triassic period.

In addition to the first dinosaurs, the Triassic was also the birthplace of the first mammals. Just like the first dinosaurs, these were also very small and vulnerable. For example, you can think of animals that looked a little like mice, such as the Megazostrodon or the Morganucodon. Nevertheless, all the mammals we know today evolved from similar small animals.

The end of the Triassic

The Triassic came to an end around 201 million years ago, as a new mass extinction occurred. Scientists are not sure what caused this, but it may have been caused by a colder climate. These kinds of events can cause many species to become extinct, because many plants can no longer grow as a result. As a result, there is less food available for herbivores, which then starve. If there are suddenly fewer herbivores, there is also too little food for predators, which also become extinct.

For the dinosaurs, this was actually not so bad. After all, they were still small and therefore needed less food to survive. Mass extinctions often affect the animals that are high up in the food chain and dominate their habitats. These animals are often large and need a lot of food and a large territory. Now that the biggest competitors had died out, the next era, the Jurassic, offered many opportunities for the dinosaurs to develop further.